Recently an in-depth study was performed looking at onshore Texas blowout data, using information available from the Texas Railroad Commission’s website. This study looked at blowout statistics and what operational phase they occurred in, annual rig counts, oil price data and what benefit Safe Influx Automated Well Control could have made on reducing the number of Texas blowouts (had it been available at the time), based upon current technology and future module developments. Fundamentally, the Safe Influx Automated Well Control technology largely eradicates the very serious human factors’ issue, and it is this that leads to significant reduction in well control incidents.

The well reporting system was not mandatory in Texas before 1973, and it was noted that in 1975 the quality of the reporting started improving. Additionally, whilst there were requirements for key administrative information (Lease ID, drilling permit number etc) there was not a need to define the well control event in the way that SINTEF, for example, has required. Also, well type (exploration or development) were not distinguished. During the period 1970 to 2019 in Texas, a total of 708,060 wells were drilled, and there were a total of 1250 recorded blowouts. However, many of the blowouts could not be properly analysed due to quality assurance concerns over the details, resulting in a total of 394 blowouts being used as the basis for this report.

In this short report there is not time to go into greater levels of detail, but some interesting statistics are presented in graphical form:

a) Number of Blowouts vs Rig Count: 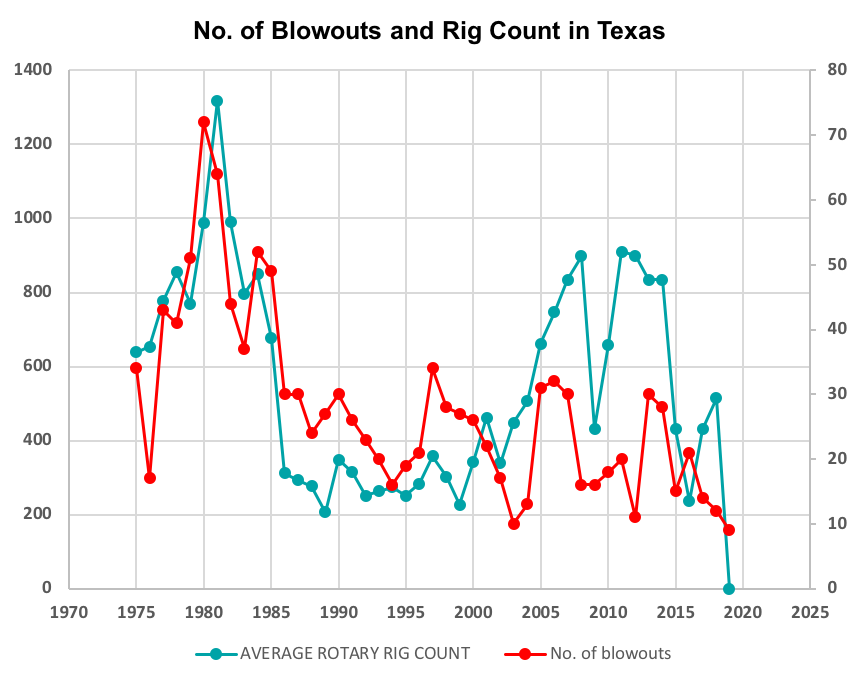 Broadly speaking, the number of blowouts has tracked the rig utilisation, but with some improvement in the period 2000-2015.

b) Number of Blowouts per 100 active rigs, per year: 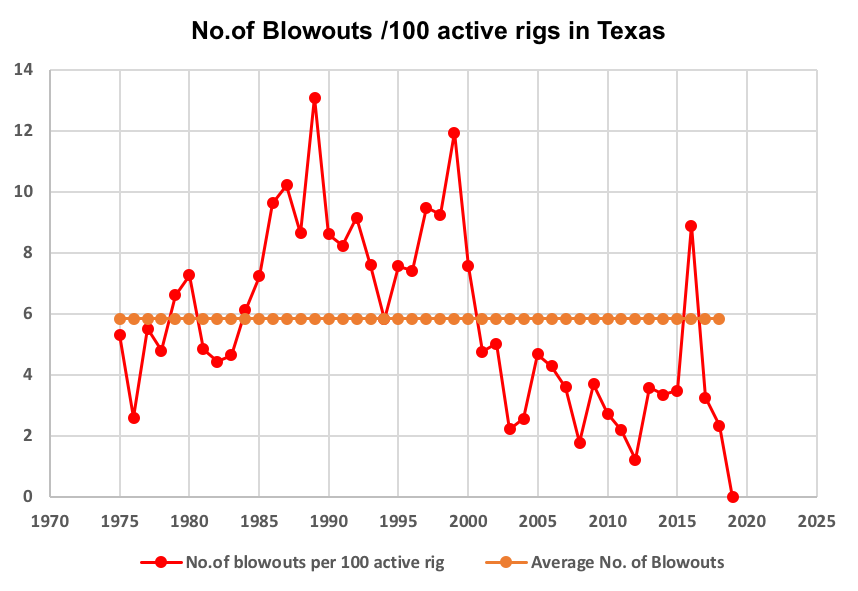 The worst period for blowouts was 1985 -2000, with generally lower figures prior and post that period, but the average over the whole period is about 6 blowouts per 100 active rigs per year.

Safe Influx Automated Well Control is designed to largely eradicate the chance of blowouts occurring due to human factor issues, and to shut-in wells quickly such that the influx size is minimised.

There are currently over 60 technology modules in concept/development and these are designed to provide Automated Well Control during every phase of a well’s life cycle. However, any blowouts that are caused due to failure of well control equipment will remain an issue.

The historical Texas blowout data was analysed into 11 distinct operational phases, and the current and planned future Safe Influx technologies were assessed across the various blowouts that occurred during these operational phases. Of the 394 blowouts analysed, it was concluded that Safe Influx Automated Well Control would have likely prevented 297 of these. Examples of ones that could not have been prevented are where blowouts were caused by well control equipment failure, or where well releases initiated during the nippling down/up of the wellhead when the BOP was disconnected.

Some key conclusions resulted from this study:

The conclusions made above were based on the sample of 394 wells, where the quality of the information was considered sufficiently detailed enough for the analysis to proceed, and these wells spanned the period from 1975 to 2019.  Safe Influx believes it would be reasonable to assume that these key conclusions are likely to be valid for the complete 1250 blowout dataset.